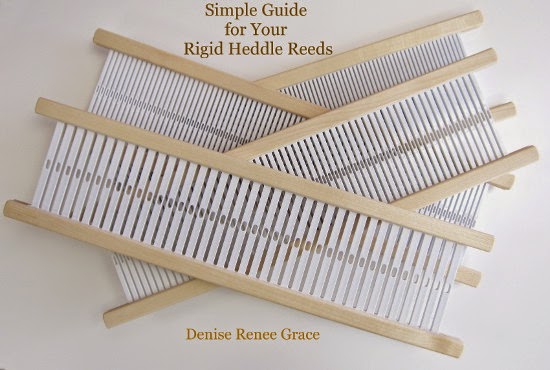 Let’s talk rigid heddle reeds! There are 5-, 8-, 10-, and 12- dent reeds available for the Cricket and Flip Looms, in addition to Variable Dent Reeds.

The Cricket looms come with 8 dent reeds because worsted weight is the most common yarn for beginner weavers.  To create a balanced weave, use a worsted weight in the weft as well and beat lightly.  Remember, when the tension is taken off the fabric, the spaces in between the yarn will fill in a bit, and when washed, the yarn will “bloom” and the spaces will fill in even more.  Make sure to give it enough space by just “kissing” the yarn in place with the beater instead of pounding it in place.  An 8 dent reed is perfect for a blanket, and even blankets can be made with the rigid heddle loom by sewing strips together.

This reed allows us to start to get into the finer gauges of knitting yarn.  Sport weight can have a nice drape to it if “kissing” rule (above) is followed.  You should be able to see squares in between the threads while the fabric is still on the loom.  Sampling is important to see what kind of fabric each yarn combination of fiber and color can make.  Some yarns shrink at different rates and others won’t shrink.  Variegated yarn tends to pool for a beautiful faux ikat pattern.  Using a solid or semi-solid in the weft with a variegated in the warp gives fabulous results. I know there are probably loads of sock yarn stashes out there just waiting to get used.  Those few skeins make great lightweight scarves for friends and family! Pick-up patterns with the fine weight yarn are delicious. There are also spacing techniques which can add visual interest. From the Schacht Winter 2014 newsletter

Variable dent reed:
There are so many things you can do with this, the sky really is the limit! Our sales team members challenged each other to come up with a new project for the Variable Dent Reeds, and the results were varied and fabulous. We have found that some of the projects, like the plaid scarf below, turn out to be really subtle when all is washed and done.  What would you do with a VDR?