From Explore Tapestry Weave Along. View the first post here.
With Jane Patrick

We’re ending our weave along with my favorite technique, rya or ghiordes knots. I love the freedom of creating a design with this technique and the cut pile surface it creates.

Ghiordes knots is a knotting technique. It does not have discontinuous wefts so is not considered tapestry. So, why am I including this in our explore tapestry weave-along? Simply put, it is a technique that I love and I want to share it with you. Also, it is a weft-faced technique that seems compatible with tapestry.

Cut pile dates back to 500 B.C. We know this from a rug discovered in a tomb in the Altai Mountains of Siberia, preserved there by ice for centuries. The ghiordes knot we’ll explore here was used to make this rug. If you find you love making knots and want to learn more, Peter Collinngwood explores this further in his book The Techniques of Rug Weaving. I also have a section on ghiordes knot in my book The Weaver’s Idea Book.

The ghiordes knot is probably the most-used knot for pile rugs because it is highly secure. It doesn’t ravel or come undone. It can be tied from a continuous strand or from cut pieces. Because every knot is tied individually, you have infinite design options.

There are two basic elements to a cut-pile fabric: the plainweave ground and the pile (knots). A row of knots is followed by 2 or more rows of plainweave, depending on the use and length of pile. The knot is tied over two warp ends.

It is traditional to leave the 2 selvedge warps free of knots (you fill in the selvedge areas with rows of plainweave) which prevents the textile from curling. Here, because we are just weaving a small amount, I’ve made knots all the way to the selvedges.

Often ghiordes knots and rya are used interchangeably. Traditionally, though, rya is a Scandinavian rug made with ghiordes knots with a pile as long as 6″. Start by designing on graph paper. For this example, we have 36 warp ends which translates to 18 knots, because each knot is worked over two warp threads. I began by numbering the squares on my graph paper and then marking the center line. You’ll have 9 knots on each side of center.

I began drawing a symmetrical design on graph paper. If you want each knot to be a square of color, you may find that you need to repeat each row more than one time. The knots as I tie them are about 1″ long. Later, I trimmed the fringe to about 1/4″. I’m using 4 weft ends together as one and weaving two rows of plain weave between each row of knots with the same yarn tripled, as I’ve been doing in the tapestry areas. 1. Insert the working end (short end) of the yarn between two warp threads. 2. Bring the working end of the yarn over the top of the two warp threads. 3. Bring the working end up through the center between the two warp threads. 4.Hold onto the working end and pull out the slack with the long tail. Pull down to tighten. 6. Trim the pile on the loom and finish after the weaving has been removed from the loom.

These illustrations may also help you to understand this technique. After I finished the ghiordes knots, I still had some warp left, so I decided to try making a cartoon and weave many of the techniques we’ve learned over these past five weeks, a review of sorts. 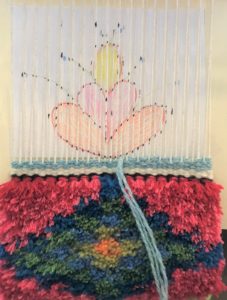 I made a drawing and attached it to the cartoon holder on my Arras loom. I then marked the warp with black washable marker. Work the decreasing shape first. In this case I wove the background before the center petals. I used hatching where the 2 sides of the petals meet. When I had finished weaving the petals, I outlined them with soumak using just a single end of yarn. The second set of leaves are complete and now I’m beginning to fill in the background in blue. The background has been filled in and the “arm” worked in soumak, punctuated with a single ghiordes knot at the end. The top shape has been woven and outlined in soumak Filling in the background. The design has been completed and 2 ½” of background woven to complete the sampler.

Having barely used a cartoon before, I decided to draw a simple design which I attached to the cartoon holder on my Arras loom. I then traced the design onto the warps with a washable marker. Right away I realized that scale is so important when working with a cartoon. The subtle curves just weren’t as defined or cute as my drawing and I wished for a warp sett of 8 or even 12. (Is that considered sett envy?)

All in all, though, I got the hang of using the marked warps, as well as referring to the cartoon as I worked. What I intended as an abstract botanical, ended up looking like some sort of alien with 6 arms shaking pompoms. Live and learn.

The techniques I used were: hatching, slit tapestry, soumak outlining, and little ghiordes knots. It’s a silly design, but it was worthwhile trying out different techniques and making all the little decisions along the way.

How should I fill in between objects? (Use separate butterflies to weave little sections, such as between the arms.)

How do I create an outline? (Outline after the shape was woven.)

How do I keep in the right shed? (Always finish my sequence.)

How do I define the point where the petals meet? (Use hatching.)

After the final pompoms, I wove 2-1/2″ of plainweave selvedge to selvedge, enough at the top to make a hemmed edge. I completed the weaving with a row of soumak which acts as a weft protector once I cut the warp from the loom.

The first step is to cut the warp from the loom. Leaving at least 4″ will make it easier to work the Damascus edge finish.

Secure the weft. You don’t want your weaving to ravel. At the bottom of the weaving, I left the twining and then worked a Damascus edge. Place your sampler face down. It is helpful to use a weight so the weaving doesn’t move around while you are working. (I have a flannel-wrapped brick I use for this purpose.) For this sampler, I decided to leave fringe at the bottom. For the top edge that will be hemmed, I still made a Damascus edge to further secure my weft. Then I clipped the ends short and made a turned hem which I handstitched in place. Sewing in the Ends

Except for any ends hanging at the selvedge, you could choose to leave the ends on the back hanging (this is a sampler after all). I have a little problem with messiness, so I opted to sew in the ends. Half way through, I did wonder about this decision… I sewed in each strand of my tripled weft separately up or down a warp thread so that only one weft followed the same path along the warp. Sewing in the ends. Sewing in the ends, detail.

Hint: Choose a tapestry needle that is as big as possible because you will be threading it many, many times. It’ll be easier with a large eye. You just don’t want the needle so large that it is difficult to slip up the warps.

You may notice that after removing your weaving from the loom it relaxes a bit (shrinks). That is natural. It may shrink a little bit during the next step which is to steam your sampler with a hot steam iron and a press cloth. If you find that one end is a little narrower than the other, you can coax out the weaving when it is warm and wet—similar to blocking a sweater. Hemming. Trim the warp ends to about 1/4″, and using a press cloth and a lot of pressure, steam the edge with a hot iron. Turn under the edge and using a press cloth, pressure, an iron, steam the fold. Sew the hem by hand. If you want to hang your sampler, you can sew Velcro to hem tape and then stitch the tape on the hem edge.

Now you are finished! I hope you had as much fun as I did these past few weeks. I so enjoyed seeing the work you shared. I was learning right along with you and now I am looking forward to trying the next warp, adventuring into 8 epi and more of a planned weaving, exploring more of the vast field tapestry has to offer. I would love to hear your thoughts and ideas about the weave along. What you liked, what you didn’t.