August 2020 marks the 100th anniversary of the 19th amendment, which gave American women the right to vote. For decades, suffragists worked steadily to achieve their goals in the United States and other countries. We’re celebrating this momentous event in the August newsletter with an article on textiles in the suffrage movement and a wall hanging inspired by Theo Moorman, a contemporary of the suffragists and a pioneer in weaving.

This piece was my first experience using Theo Moorman’s inlay technique. Once I got started, I couldn’t stop—there are endless possibilities. I always find that every weaving idea brings a million more.

As with all my weaving projects, there is a creative process that I go through:

Throughout the weaving of the final piece, my ideas changed slightly and I adjusted my plans as new ideas came about. I hope you have as much fun as I had exploring and experimenting with this technique!

Textiles, the Power of Resistance, and Winning the Vote

A thread weaves through history, binding women’s work together from ancient times to the fight for suffrage. Women have sat together to spin, weave, sew, and embroider since time immemorial, so they could share the demands of childcare and household management. Elizabeth Wayland Barber calls this “a tradition with a reason” in her book Women’s Work, which explores the first 20,000 years of women, cloth, and society. Domestic roles and exceptional textile skills prepared them for the fight to win the vote, using stitching and costume to advance their cause.

Expanding Our View of History

As the 100th anniversary of suffrage in the United States approached, historians dug deep into files and artifacts from the movement. New research reveals a complex and fascinating story of the struggle to secure the vote for women in the United States. This social movement, full of unexpected twists and turns, was truly a political revolution that began long before the Seneca Falls convention in 1848.

American children often learn about Susan B. Anthony and Elizabeth Cady Stanton as leaders of the movement, but their knowledge may not go much deeper. In fact, the suffrage movement grew out of the abolitionist movement and included many women of color such as Sojourner Truth and Ida B. Wells, African American activists, and Zitkala-Sa, a leader in the Society of American Indians. Iroquois women also inspired the movement by providing a solid model of governing in which women took a major role and had authority over their own lives. Many women of political genius, such as Alice Paul, inspired and led the movement. A diversity of women of color, working class and immigrant women marching for voting rights, championed the struggle.

As they marched, the suffragists used a broad array of textiles to display slogans, questions, and quotations on sashes, capes, ribbons, aprons, and costumes. Banners waved with the words Forward Out of the Darkness and Failure Is Impossible. The women wore clothing that reflected their work, their professions, and their creativity. The highly educated strategist Alice Paul also sewed a suffragist flag to be carried in rallies and was the first person ever to organize protests at the White House. The Silent Sentinels picketed for more than two years outside the White House, all dressed in white—a symbol that Congresswomen borrowed for the 2019 State of the Union address. The suffragists broke boundaries, went against “convention,” and used textiles to advance their cause in creative and symbolic ways.

In the United Kingdom, protests were both aggressive and nonviolent, again including participants from diverse backgrounds. Leaders with art school training encouraged marchers to use needlework and color to create banners for massive rallies. Silk threads, fancy fabrics, and beautiful textiles countered the message that suffragists were unfeminine and immodest. The banners contained eye-catching emblems and celebrated female heroines using embroidery. Women who participated in violent protests went to prison and stitched messages onto handkerchiefs documenting the names of those on hunger strikes. These small pieces of fabric carry images of empowering resistance using the strength of women’s domestic role. These artifacts contain the history and meaning of this movement and provide new details to a very complex history of suffrage.

As women marched to win the right to vote, the emancipation movement began to affect all domains, including art. Creative women sought ways to cross the divide between art and craft, breaking barriers and using their skills to create amazing textile designs. Theo Moorman, who failed drawing and painting classes at art school, explored weaving instead. She experimented with new structures and materials, pushing beyond yardage and rug weaving. Moorman developed an innovative technique that allowed the weaver to create sophisticated designs similar to tapestry. This approach elevated her work and confirmed her belief in the artist-designer-weaver as one person. To her, weaving was indeed an art form. Her strong sense of design, acquired from working with Arts and Crafts pioneers, left a lasting impression. The emergence of the artist as designer was a major breakthrough in the history of craft.

Contemporary historians prefer to use the title “suffragist” to describe women in the movement, rather than “suffragette.” In the early 20th century, a British journalist coined the label “suffragette” to make fun of women protesters and women in the United States found it disparaging.

Votes for Women: A Portrait of Persistence; Smithsonian Institution Catalog (highly recommended)
Threads of Life by Clare Hunter
The Subversive Stitch by Rosika Parker
String, Felt, Thread by Elissa Auther
Weaving as an Art Form by Theo Moorman
Theo Moorman 1907-1990: Her Life and Work as an Artist Weaver; edited by Hilary Draper, published in conjunction with a 1992 retrospective of her work.
Women’s Work: The First 20,000 Years by Elizabeth Wayland Barber Weaving as an Art Form A Weaver’s Guide to Hemstitching A Weaver’s Book of 8-Shaft Patterns 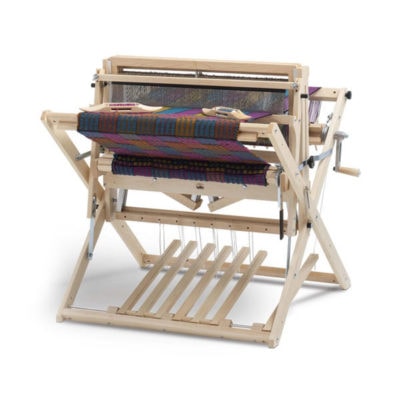