Beth Smith and Jillian Moreno live about 30 minutes from each other and spend a lot of spinning time together, trading ideas and cheering each other on. Recently, the two have found weaving sneaking into their thoughts more and more. “Wouldn’t it be fun,” they said, “to do a project where we spin our yarn and weave it and see what happens?” “Yes!” they said, “that sounds like an awesome plan.” We thought so, too. Through the end of the year, they will post on the Schacht Spindle blog, telling you about their journey weaving with handspun on a rigid heddle loom.

This week I took my cloth off the loom and finished it.

I learned something that I knew in my head but had to experience for myself. Weaving on a rigid heddle loom takes a bit of time if you are making a lot of yardage with fine yarn; the floor loom is much faster. Probably 3 times faster. That includes winding, threading, and weaving. This whole weaving took me about 5 weeks total – not including the spinning, which was about a week for the full 4,000 yards. That includes several days where I wove for more than 6 hours in a day. So if you are thinking about doing a project like this, plan on a good 3 months of focus from start to finish. However, the rigid heddle loom is a fine alternative to a floor loom if you don’t have the space or budget for one. My selvedges are pretty even, the tension was good and the fabric turned out beautifully.

After I came to the end – that’s where the warp won’t advance anymore and you can no longer get the shuttle through the shed – I cut the fabric off and took it to the sewing machine so I could zig zag the edges so the threads wouldn’t ravel in the washer. After the sewing the ends of the fabric, I went back to my comfy chair to sew in any ends that needed to be secured or fix any holes that occurred due to fixing broken threads. Only 3 threads broke throughout the weaving. During weaving, I fixed these with a knot tied to the broken thread and the end of the new yarn wrapped around a t-pin. Broken threads used to terrify me, but I’m getting pretty good at them now. With the fabric off the loom, I used a sharp darning needle and just wove in the ends for about an inch. I let the ends hang there until after the fabric was finished. At this point I trimmed all the threads even with the fabric surface. Off I went to the (top-loading) washing machine. I filled it with HOT water and a tiny bit of soap. For this type of fabric, I like to use Soak wash because the fabric doesn’t require rinsing–and because its easy. I let the fabric soak for at least 15 minutes and then I turned on the agitation for 5 minutes. I then checked the fabric, making sure that the fabric was cohesive. Everything looked good so I spun it out in the washer. I then placed the fabric in the dryer, this time for 10 minutes. I removed the still-damp fabric from the dryer and then I used the iron and pressed it under a cloth on the highest setting. This takes out any wrinkles or bends. You don’t want the wrinkles to dry into it or, according to Sara Lamb, you are stuck with them forever. After pressing, I hung the yardage over a hanger and let it dry the rest of the way. 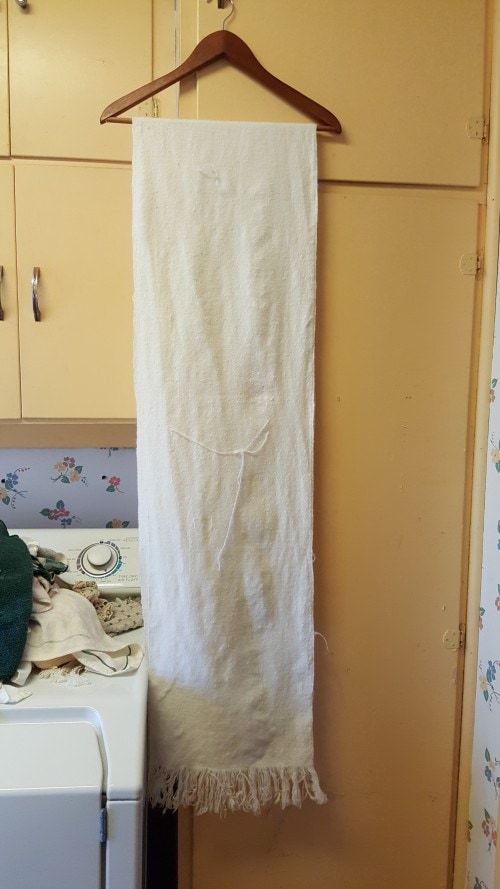 Next I’m going to chop it all up and make it be a skirt. Keep watching!

I finished my cloth this week. It really shouldn’t have taken as long as it did, but I kept squeezing in other projects. To finish I set myself up in front of the TV and watched selected episodes from the first season of Outlander. I may have dreamed about weaving a tartan. I may have thought about other, less weaverly things too.

I was grateful to have discovered the arcing style of laying in weft early in my practice weaving. Every time I noticed my selvedge edges pulling in, I added more arc to my weft and they smoothed right out.

The first thing I noticed when I pulled my cloth off of the loom…well, right after swinging the cloth over my head and doing a little victory dance… is that I miss a lot of threads when I weave. I took a peek into Liz Gipson’s Weaving Made Easy and found an easy fix. Using some matching weft yarn and for a couple of inches in either direction follow the path of the weft thread with the skip, right next to it and work the correct under or over at the mistake spot. I did some corrections above and some below the thread with the mistake and it didn’t seem to make a difference which side I did the correction on. I could see the double threads, but it really did help the skipped thread recede. Because I’m going to sew the end of my cloth together to make a mobius, I stitched a straight line close to both ends using my sewing machine. I was going to use a zig-zag stitch, but my machine had other ideas and just sewed straight while overheating. It was $20 at a garage sale about six years ago, I’m glad it made it through these last two stitched lines! Maybe Santa will bring me a new sewing machine. After stitching my edges, I finished my cloth. That’s a simple sentence but it created such anxiety in my little maker heart. I spun the yarn and wove this cloth, and I was fully aware I could totally screw it up in the finishing. Should I finish it in the sink or in the washing machine? I had an idea that I wanted to finish it in the sink with a hot water soak. I wanted the threads to pull in just a little, for the most drape, and I thought that a machine even on a delicate cycle would do more than that.

I did an experiment first. I took my practice weaving, which I wove using superwash merino yarn, and ran it through the washer on delicate and low dry in the dryer. I am not a huge fan of superwash yarn. I think it feels limp and not quite right, like the life has been stripped out of it. My woven cloth came out fine — not too stiff and really fluffy. The fringe I tied at the ends was another story. Remember the groundhog that lives under my deck? My fringe looked like he had special Outlander-inspired frolicking times with my fringe. Because the yarn was superwash the ends came completely untwisted and frayed. My original idea to do a soft finish to my handspun cloth was cemented.

I soaked my cloth in tap-hot water with a drop of SOAK Wash for 30 minutes. I rolled it in a towel and hung it near my fireplace to dry. Now I can’t quit petting it. It’s drapey and Blue Faced Leicester silky. The warp and weft pulled in just slightly and the yarns plumped. The result is spectacular, better than I had hoped. The play of the color is another thing that worked beyond my plan, which was to throw it at the wall and see what sticks. The two colorways I chose worked really well together. The warp was mostly red with some orange and the weft ran between a sage green, orange and dark blue-green. I really like that I can see the color changes in the weft. I can already feel a bunch of color experiments gathering in my brain. The cloth I made also passed my favorite test: the one where I leave it sitting on my dining room table and see how many people touch it and comment. A lot of people touched this one. Even my mostly wool-allergic husband touched it. Other people stroked it, squished it, flung it around their neck, and generally cooed over it.

I can’t wait to put this shawl together. There will be hand stitching and maybe even some embroidery, but that’s for next time!

Jillian Moreno, author of the best-selling spinning book Yarnitecture: A Knitter’s Guide to Spinning: Building Exactly the Yarn You Want, can’t stop writing and teaching about spinning and using handspun to knit, weave and stitch. She explores, questions and plays with fiber and wants to take as many people as possible along for the ride. When she’s at home in Ann Arbor, Michigan, she can be found wantonly basking in her stash and working on her next book.